Nigerian gay rights activist, public speaker, blog writer and HIV/LGBT advocate, Bisi Alimi has called out and accused controversial cross dresser, Bobrisky of being a fraud to the transgender community.

Recall that few hours ago, Bobrisky explained why he stopped being a male. The 28 year old disclosed that he did not achieve anything as a male and he had nothing to show for 25 years.

The self acclaimed barbie doll explained that he started making enough money since he started acting like a female and he will be going for full male-to-female transition in 2021.

Reacting to this, Bisi Alimi  stated clearly that Bobrisky is a threat to the transgender community and a fraud as well because he is only acting like a woman to make money.

“I have said this before and I will say it again, Bobrisky is a threat to the Trans community in Nigeria and it is high time we called him what he is, a fraud!!  I am never one to misgender anyone but Bobrisky is (based on this comment) a man in a woman’s clothing for profit and that’s not what being Trans is.” 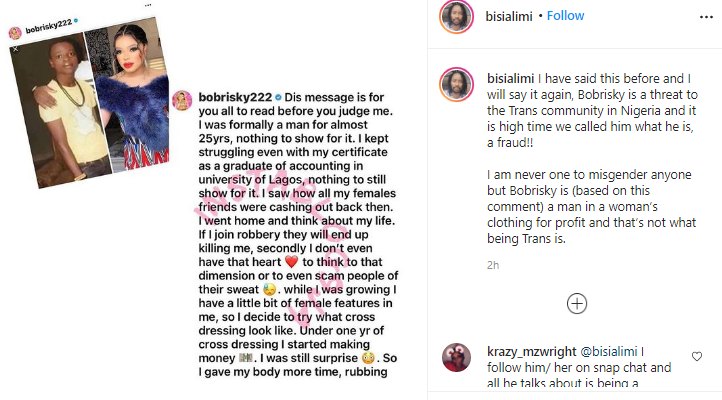