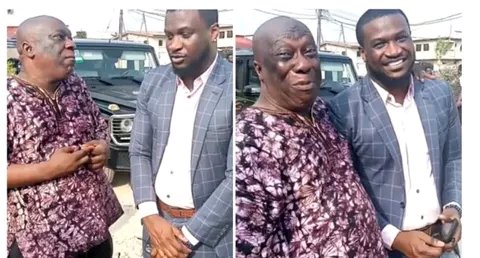 Comic Nollywood Star, Charles Awurum, shared an incredible video of him and Peter Okoye hanging out together at an undisclosed location.

Taking to Instagram, the veteran actor shared the hilarious video where he compared himself to Peter.

He asked Peter Okoye to apologise or he will commit suicide by jumping into the Third Mainland Bridge.

In the video, he can be heard saying:

You tall pass me.

You fine pass me.

You con get money pass me again.

Oya apologise to me now.

If you no apologise to me now, I go Third Mainland Bridge.”

After saying those statements, Peter promised to send him some cash. They ended the conversation by laughing in crazy way. According to reports, they were at a scene shooting a movie/comedy skit.