An African lady has shared how her own cousin demanded se.x from her in exchange for financial assistance. 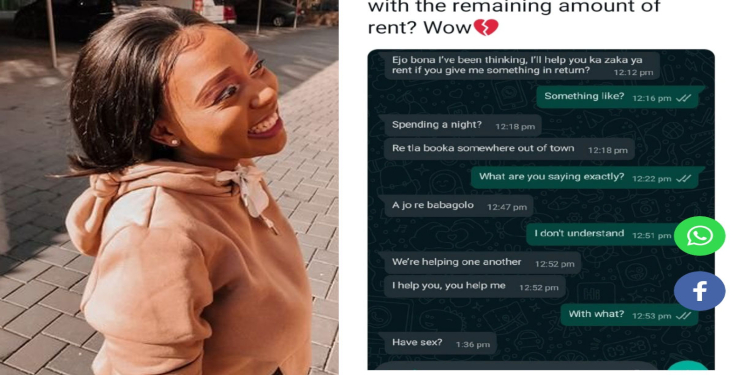 The lady identified on micro-blogging platform as @Neilwejoy revealed that she reached out to her cousin requesting for financial support in paying her rent after raising some of the money.

She said that after telling him this, her cousin told agreed to help her but on the condition that she will give him her honeypot in one night and as shocked as she is when she informed her aunt, the guy’s mum, the mum gave her word she will deal with him but she should not divulge this with anyone else.

“My own cousin wants me to have s*x with him in return to help me with the remaining amount of rent? Wow

UPDATE
my aunt called (his mom) saying i shouldn’t tell my dad or anyone else, of which i already did, saying she’ll sort it out (meaning she’ll sort out her son) i don’t know what must happen now, i don’t even know what she meant.”

Read their conversation below;

@melaphoenix: IF THIS STORY IS TRUE, Am i the only one that thinks his mum is just as sick as he is? She cares more about her family reputation than dealing with the fact that her son is basically suggesting incest.

@badguyforrealmen: If you won’t sleep with him fine! Must you bring it online? Abeg Getat

@nnenna_aldo: Women who try to hide assault in the family are one of the problems we have. They let their husbands and sons molest people while they cover it up to save face. Thank God she is grown and he didn’t take advantage of her

@tochi_tee: See, the end of all this long gibberish story is “HAVE YOUR OWN MONEY”. That is the answer to ALOT of things. I mean ALOT. Simple.