Home Celebrity Gist #LekkiMassacre: ‘Did You Give The Orders?’- Runtown Asks Sanwo-Olu

Governor of Lagos state, Babajide Sanwo-Olu has been quizzed on Twitter by a popular musician, Runtown over the killing of unarmed protesters at Lekki toll gate.

Runtown took to Twitter to ask the Lagos State governor if he gave the orders for armed military officers to shoot at peaceful protesters at Lekki Tollgate on Tuesday, October  20, 2020.

His tweet reads:
“DID YOU GIVE THE ORDERS??? @jidesanwoolu #LekkiMassacre”
The 31-year-old Enugu native has also reacted to a report by Amnesty International, USA. The report states that there is ‘credible’ but ‘disturbing’ evidence to prove that ‘Nigerian security forces have killed demonstrators protesting police brutality in Lagos’, adding that ‘investigations are underway’.
“JUSTICE MUST BE SERVED“, Runtown wrote as he retweeted the tweet.
See his tweets below: 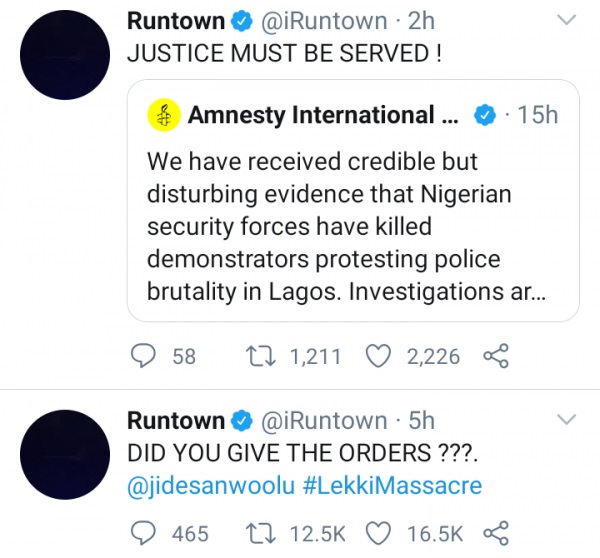