Home Viral Meet The Policeman Who Has Never Shot A Single Person Since He...

Assistant Superintendent of Police, Sunday Erhabor, has been honoured by the Governor of Lagos State, Sanwo-Olu for his excellent work ethic. 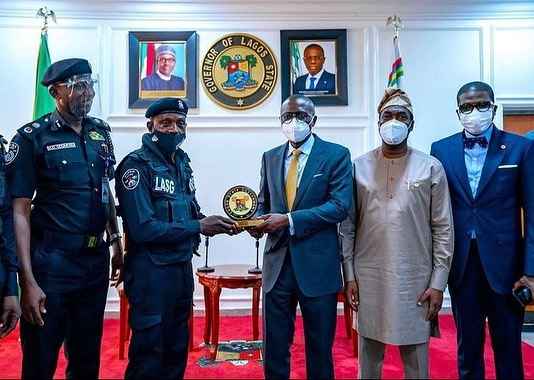 On the record, he has never fired a gun at anyone since he joined the police force in 1992. He was involved in a chat with Kayode Oyero where he opened up about his career. Below are the contents of the interview.

When did you join the Nigeria Police Force?

I joined the Force on June 1, 1992; I have about five years to retirement. God has been keeping me on the job.

What motivated you to join the Force in 1992?
Actually, I was searching for job in 1992. I had gained admission into UNIBEN (University of Benin) but there was no sponsor, so, after my first semester I had to leave. I started looking for a job. I then met a friend who advised that we should join the police. We had tried but there was no help from anyone. One day I was walking along Ikeja and I saw some people gather at the Police College. I went inside the premises and as I was moving down, a man asked me, ‘Where are you going?’ I told him I wanted to join the police. He then said, ‘You are walking gallantly. They will take you; it is people like you that they want.’ So, I got inside and filled the forms and wrote the examination. I was told that I passed and asked to come for physical training. That was how I joined the police as a constable. My salary was around N400 then – it was during the (late) MKO Abiola crisis.

Can you recall some of your worst days on the job since you joined the police in 1992?

I can’t recall everything but there have been many such days. One happened while I was in Festac. We were on a skeletal stop-and-search duty along Okota road. I stopped a car, with a woman and her husband sitting in the front seats. Then the woman came down and yelled, ‘Why are you stopping us?’ Then the next thing was that she slapped me on the face. I kept quiet and walked to the man and asked him, ‘Are you the husband to this woman?’ He said, ‘Yes.’ I then said, ‘The way this woman slapped me, I will want her to also slap you that same way if actually you are a man.’ That was just one of those encounters. I have been faced with a lot of humiliating situations, but I have always kept my calm and didn’t unleash my might against such people. As a public servant, one is bound to encounter different situations particularly when you are on the field.

I have received so many comments from my colleagues. They say I am too patient. But I do tell them that age is already telling on me and I have no reason to be angry when I have children like the everyday person I encounter on the job. So, I treat everyone like my child or my younger siblings.

Have you ever shot anybody before?

God forbid, I have never shot anyone before.

Are you sure that you have never shot anyone since you joined the Force in 1992?

Yes, I have never. Whatever you do to somebody, somebody must do to you. In fact, I hate those sessions that require shooting. Shooting people is not a good omen. Every day, before any operation, I do pray to God that He won’t allow me to encounter a situation that would warrant me to shoot.