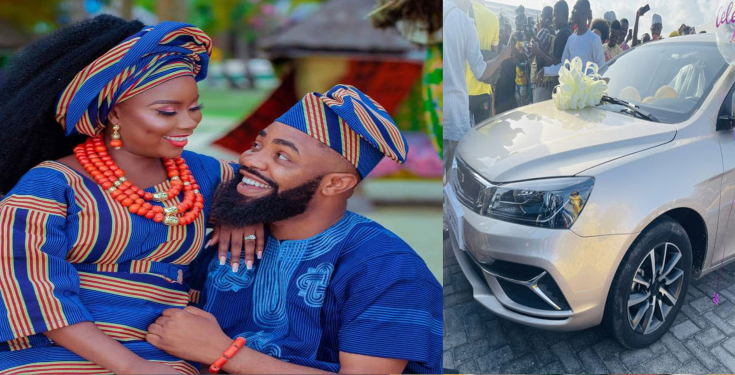 Woli Arole tied the knot with his heartthrob, Yemi on Saturday, April 10, in a colorful white wedding which was highly attended by his fans, family and colleagues in the movie industry including DJ Neptune who did what he is known best to do on the turn tables.

A very joyous and emotional moment was captured at the wedding when Woli Arole and his wife, Yemi was gifted a brand new Geely Emgrand EC7 GL car worth N5.6.

Recalls that Comedian Woli Arole took to his official Instagram page to share their colorful and amazing pre-wedding photoshoot pictures.

Social media users expressed excitement on his milestone and showered them congratulatory messages.

It would be recalled that Woli Arole posited on Twitter some months ago that sex before marriage is sin citing that using a condom during intercourse is also a sin and urged his fans to desist from it.

”Sex before MARRIAGE is a SIN, even if you use CONDOMN it’s still a SIN. God has told us to repent of every form of unrighteousness. Start the year with a fresh relationship with Jehovah!!!!.”