Some men who are believed to be Nigerian soldiers because of their uniform have been arrested. 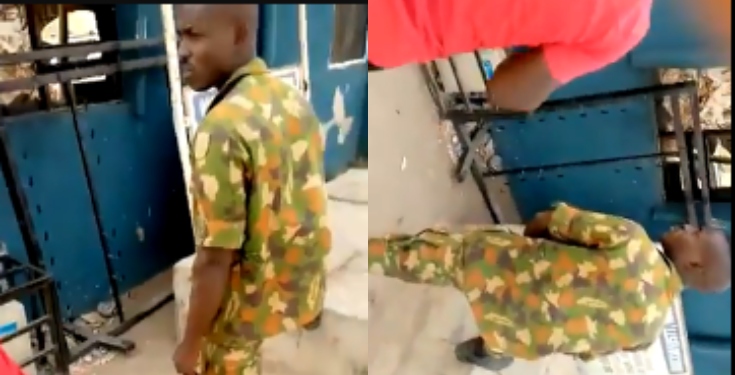 The men were nabbed in Abuja after one of their victims called for help.

According to reports, the men kidnapped a man named Paschal Oshi and took him to an unknown location in Abuja, where he was beaten and forced to transfer N220K to one of their accounts.

Paschal was later dumped in the middle of a bad road in Kubwa, Abuja, but he raised alarm before his abductors could go far.

Locals rushed after the car that couldn’t zoom off fast enough due to the poor state of the road and they were able to apprehend some of the “soldiers” while others got away.

The uniformed men were taken to a police station where their car was searched and another victim named Jacob was found in the trunk of the car.

A relative of one of their victims shared video and photos to Twitter while alleging that the Army is now “compromised.

On going right now, these supposedly acclaimed soldiers of the Nigerian Army Kidnapped one Mr Pascal Oshi, took him to an unknown location, beat him up and forced him to make transfers the sum of 220k to them. @HQNigerianArmy @AishaYesufu @TundeEddnut pic.twitter.com/ktOa1GE2Ra

This was the man that was found inside the boot of their Car. From investigations I discovered that his name is Jacob. That Benz without plate number was one of the cars they used in kidnapping them @HQNigerianArmy @AishaYesufu @PoliceNG pic.twitter.com/itWd6DA513