Home Entertainment News ‘No Be Juju Be That?’ – Reactions As Nigerian Boxer Adegbola Knocks...

A young Nigerian boxer reportedly known as Adegbola is currently the talk of social media after knocking out his opponent in 15 seconds of the first round of their match. 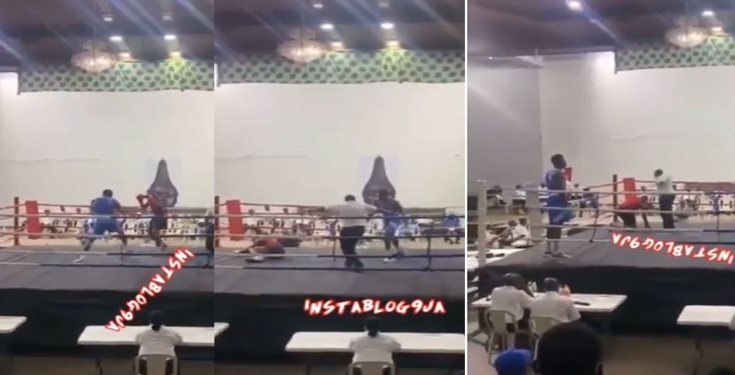 Adegbola and his opponent whose identity is yet to be revealed faced it off at the National Sports Festival in Edo State and without wasting time, Adegbola landed a heavy jab on his opponent that brought him down making him the winner in less than a minute.

A video which captures the moment Adegbola knocked down his opponent has gone viral online and Nigerians on Instagram have raised suspicions that the winner had used black magic to influence his jabs.

Watch the video and read comments from some Instagram users below;

_invictus_solomon
Check his gloves, I don’t trust him

mhoyito
No be juju be tha

iamstevero01
Nollywood in edo state, I noticed the director

peacemaker6401
Edo this one na battle of the Jujus

rayartworld
Yes!!! Let’s push him to the world…He needs to represent 🇳🇬 out there

__teejay.e__
Nigerian government will not invest in this guy now

#BBNaija: “I was taking my bath Angel came in, we showered together” – Cross

#BBNaija: “The lady that caught my attention was Maria, but I withdrew when I discovered she was a wild card” – Whitemoney (video)