Reactions have trailed a random photo of Pastor Adeboye’s son and wife as they were spotted rocking dyed low haircut.

Leke Adeboye is the son of the general overseer of the Redeemed Christian Church of God and as such, social media users were shocked to see him rock such ‘worldly’ haircut as they described.

on Monday, December 28th took to his social media account to jointly celebrate the wedding anniversaries of all his children.

Pastor Adeboye  also known as Daddy GO used the occasion of his last son Leke’s wedding anniversary to celebrate his other children’s. 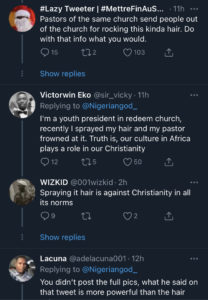 In other buzzing news, Nollywood actor, Bolanle Ninalowo has taken to social media to send a caveat to anyone who has canal intentions toward his teenage daughter.

This is coming after the recent statutory rape allegations meted at popular twitter Comedian, Justin UG who was accused of lying about his age in order to sleep with a 14-year-old girl.