Home Viral “Please do it for us so that I can go to school”...

A little boy who hawks snacks has melted hearts after he shared free snacks to #EndSARS protesters and refused to collect money.

According to reports, the little boy who appears to be out of school over inability to afford school fees stormed the protest ground and shared free snacks he was hawking to some #EndSARS protesters for free.

The Twitter user who shared the post said they begged him to collect money for the snacks he shared but he refused and said in his native language, Yoruba, “E bawa se kin le ile iwe”.

The little boy who believed the ongoing protests are beyond #EndSARS feels Nigeria would become better after the protests and out-of-school kids like him would be able to go to school. 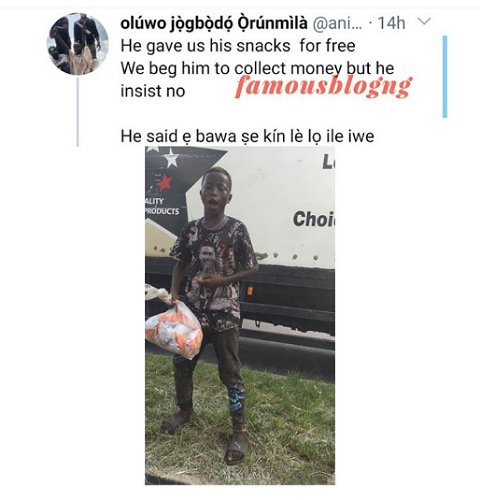