Home Entertainment News Pure Water Seller With One Leg Gets A Total Makeover From Celebrity...

The young beautiful pure water with one leg who went viral on social media selling her water on the streets has been given a thorough makeover by a celebrity stylist. 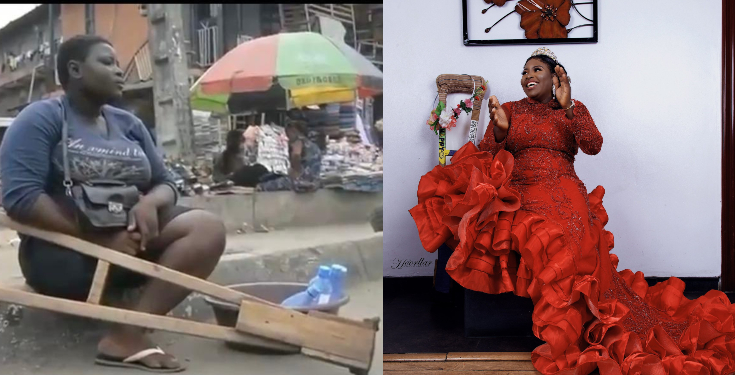 It would be recalled that photos of the pure water lady identified as Mary Daniel hawking her water in Oshodi went viral for days which attracted mixed reactions. Most people called for help while others also used their platforms to celebrate and praise her.

The video and photos of Mary Daniel hawking caught the attention of the former Imo Chief of Staff, Ugwumba Uche Nwosu who later sought after her to bless her life. Ugwumba Uche Nwosu gifted the pure water seller an amount of N1,000,000.

The politician did not only change the life of the young lady but also honored her by inviting her to dine with him and three other friends in his mansion. The photos of their meeting also went viral.

Instagram blogger, GossipmillaNaija also disclosed how some Nigerians also donated an amount of money which sum up to N14.3Million to support her or better still take her off the streets.

Mary Daniels is however in the news again as she’s celebrating her birthday. Mary has been styled by a celebrity stylist called Lumines as she celebrates her birthday. The single mother of one has been given a total makeover as she turns a year older today.

A friend of the young lady Mary Daniel took to her Twitter page to share beautiful photos of her wishing her the best of luck.

I tap into your favor and overflowing oil of grace.🙏🙏🙏🙏🙏 pic.twitter.com/Q1oj5vWlxd