A Nigerian man who seems to be a student from the Kaduna State University is lamenting about the school’s increasing the fees to 500,000 Naira. 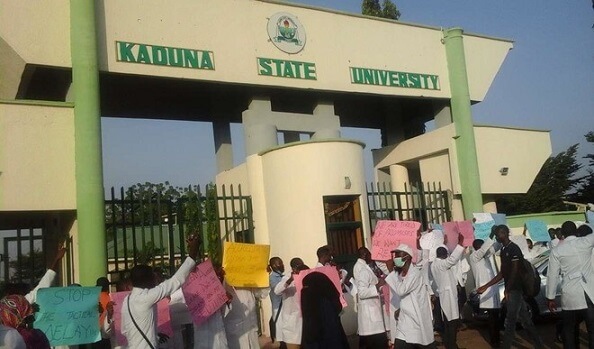 He cried that paying the money won’t even be enough as there is a high probability that some bandits in the area will kidnap you and demand for ransom from your family or the government before your release.

He quizzed maybe it would be better for him to buy application forms to join the deadly and extremist Boko Haram group since he is going into the school to learn how to shoot a gun after paying the said school fees.

The State of Kaduna has been a very hotspot for so many social vices and atrocities in Nigeria for quite some time now. The State day in and out has been recording more cases of robbery and bandits activities especially the rise of kidnapping in the region.

Couple of days ago, there were news of some bandits who attacked some students of the Greenfield University in the Kaduna State and in the process, killed three students of the university of which President Buhari on last Saturday in a statement condemned the act.

Some parts of the statement reads;

President Muhammadu Buhari, on Saturday strongly condemned the killing of three of the students kidnapped at Greenfield University, Kaduna State.

…. unfortunate the tenor of some political and religious leaders that seem to further incite and stoke the pain and anguish of mourning families who are forced to confront these atrocities.

Addressing this scourge, requires a great show of empathy and coming together as a society to squarely confront these elements and the danger it poses to our democracy and peaceful life in the country.

……will realise sooner than later that they are bound by the same fate as their victims.

“Banditry, kidnapping and the politics of murders will be fought with all the resources available to our country