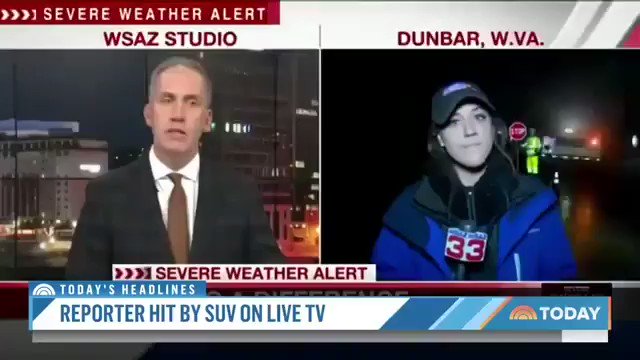 A TV reporter was knocked down by a car while she was live on air.

Tori Yorgey, a TV reporter for WSAZ in Huntington, West Virginia, was reporting the news from Dunbar on Wednesday night, Jan. 19, when the incident occurred. She was just about to discuss reports of water main breaks and slick roads amid the freezing conditions when she and her camera were struck and knocked to the ground by a car.

Video of the incident shows Yorgey with her back to the approaching vehicle when she was knocked over.

“Oh my God …. I just got hit by a car, but I’m OK!” a visibly shaken Yorgey told anchor Tim Irr who was in the studio.

Irr responds: “Well, that’s a first for you on TV, Tori.”

“That’s live TV for you. It’s all good,” Yorgey added as she struggled to get herself together.

“I actually got hit by a car in college too. Just like that! I am so glad I’m okay,” she continues.

As she picks up the camera she reassures Irr: “We’re good, Tim.”

She added: “My whole life just flashed before my eyes, but this is live TV and everything is OK.”

She stood up and resumed her broadcast despite appearing shaken by the incident.

“I thought I was in a safe spot, but clearly we might need to move the camera over a bit, so let me do the while I’m thinking of that,” Yorgey said as she resumed her report.

The incident happened on Yorgey’s last week on the job.

Se said: “You know, it’s my last week on the job and this would happen.”

Tv reporter gets knocked down by a car during live report. pic.twitter.com/AevsrmMtox