Home Viral Valentine Wahala: Man Catches Girlfriend In Bed With Another Man As He...

A young man has caught his girlfriend in bed with another man as he decides to surprise her on Valentine’s Day with some Val’s gifts. 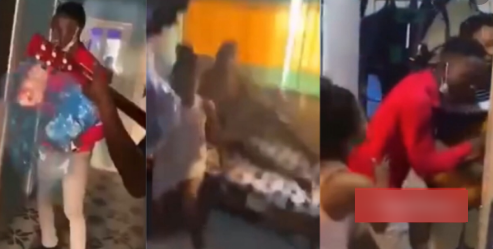 The viral video captures a man who hired the services of a guitarist to play her girlfriend’s favorite song as he carries along with him some red flowers and gifts to present as a token of love to this lady.

The young man who batched into her girlfriend’s room hoping to see her along met her with another man in their bed.

The main boyfriend storms out of the room angry with the guitarist.