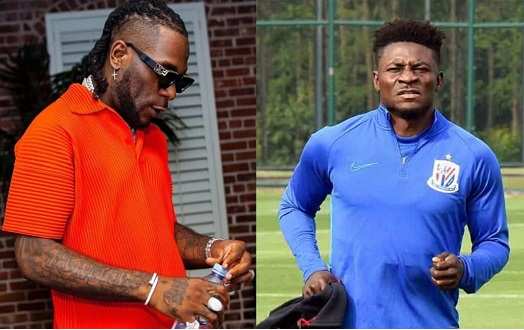 The rapper took to the social media platform, Twitter where he called out the self-acclaimed African Giant expressing his disappointment in him.

According to CDQ, the singer and his boys had grossly disrespected the former Super Eagles striker and need to apologize to him as he is a bigger legend than Burna Boy.

While he did not share details of what exactly transpired between Burna and Obagoal, he did shade Burna Boy calling his “African Giant” title a village one.

“Burna for the first time I’m disappointed in u!!!!! U and ur boys need to go apologize to Obagoal now! No let dem dey deceive u wit ur village title say african gi-ant com dey disrespect Oba Eko lonpe bi. Obafemi Martins is not anybody’s mate. if we dey cry make we dey see

“U don’t disrespect anyone in my circle  and I look d other way, no way”

While many pondered as to what might have really occurred between the singer and the footballer, popular Instagram gossip blog, Cutie_julls alleged that Obafemi Martins had slapped Burna outside a nightclub during an altercation.

According to the gossip blog, the drama allegedly began after Obafemi allegedly confronted a member of Burna’s team, to which the singer did not react too kindly.

“About CDQ’s earlier outburst on Twitter, Apparently, Burna and his guys confronted obagoal and told him to dobale (prostrate) for one of his guys outside Quilox club, That why will obagoal ‘tasi’(confront) one of his boys, That Obafemi Martins at his age should prostrate.

Burna’s boy confronted Oba very Aggressively saying why is obafemi making noise. Who dey shout etc right in Obafemi’s face. So Obafemi got angry then slapped him. Burna reacted. Obafemi told him when elders are talking the guy shouldn’t do that. That Burna should caution his boy on his own instead.

“We don’t know the name of Burna’s guy yet but we learnt it was one of the short guys in Burna’s team. Oba eventually apologised but Burna kept going on and his boys wanted to let Oba do frog jumps if not the intervention of other club attendees that came to his rescue

“Authentic as it happened at Quilox.. mama with the gist. NB:- Oya.. bloggers come and steal and don’t credit Mama as usual lol😩😩 wahala”

While neither Burna Boy nor Obafemi has come out to react to the allegations fans have started arguing over who is richer and more popular between Burna Boy and Obafemi Martins in order to decide who is supposed to respect whom.